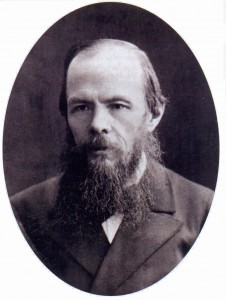 Fyodor Mikhilovich Dostoevsky (1821-1881) was born in Moscow and spent his early years there, but St Petersburg was the city with which he became most closely associated. He moved to Petersburg at the age of 16, and in 1838 took up a place to study at the Academy of Military Engineers, housed in Mikhailovsky Castle, where Emperor Paul I had been assassinated in 1801. This was not a particularly happy experience; distinctly less wealthy than most of the students, and already aspiring to a literary career, Dostoevsky was a fish out of water both socially and intellectually. He graduated from the Academy in 1843, and resigned his army commission the following year in order to pursue his literary ambitions.

Dostoevsky’s first published work, a translation of Balzac’s Eugenie Grandet, appeared in 1844. Towards the end of the following year, he completed Poor Folk. The story of what happened next is well known. Dostoevsky’s friend Dmitry Grigorovich took the manuscript to the writer, critic and publisher Nikolai Nekrasov, who, highly impressed, showed it to Vissarion Belinsky, the most influential critic of the day. He too was full of praise, and the novella was published in Nekrasov’s Petersburg Collection in 1846 to great acclaim, and Dostoevsky was welcomed into literary cricles as the newest talent of the age. But he experienced a rapid reversal of fortune, as his next work, The Double, which appeared shortly after, was dismissed by Belinsky as a derivative fantasy, a judgement that was widely shared at the time – this was surely one of Belinsky’s few mistakes. Subsequent stories such as Mr Prokharchin (1846), The Landlady (1847) and White Nights (1848) received a mixed reception, but, like his first two works, represented important stages in his development. Dostoevsky also began to work on Netochka Nezvanova (1849), the Bildungsroman of a poor young girl rescued from poverty following her parents’ death.

All of Dostoevsky’s early works are not only set in Petersburg, but the city, developed as a literary image by Pushkin, Gogol and others, becomes a character in the stories. In Poor Folk, the poverty-stricken clerk Makar Devushkin is crushed by the city whose bureaucracy he supports. When Mr Goliadkin’s doppelganger appears in The Double, the sick psychology that results in the fragmentation of his personality is not only a consequence of his inability to adapt to the mores of the civil service, but also of the hallucinatory atmosphere of the city; it is no accident that Goliadkin Jr emerges out of the snow and fog. The figure of the ‘dreamer’, cut off from real life, is identified as a Petersburg type in Dosteovsky’s feuilletons of 1847.

Philosophical discussion groups played a significant role in intellectual life in Petersburg in the 1840s, and Dostoevsky started attending meetings of the Petrashevsky Circle in 1847. This group was quite moderate in its outlook and plans, but Dostoevsky also became involved with a more radical offshoot, the Palm-Durov Circle, which may have had revolutionary intent. On 23 April 1849, Dostoevsky and other members were arrested, and imprisoned in the Peter and Paul Fortress. In November 1849, Dostoevsky was sentenced to death, and on 22 December was subjected to a mock execution. The prisoners were led out onto Semenovsky Square, the first three, including Petrashevsky himself (Dostoevsky was in the second group), were tied to stakes in front of the firing squad, before a messenger rode up to announce the sentences had been commuted hard labour. Dostoevsky’s transport to Siberia set off two days later.

Dostoevsky served four years’ hard labour in a prison camp in Omsk. He later depicted his experiences there in fictionalized form as Notes from the House of the Dead. Following his release, he was sent into exile in Semipalatinsk to serve as a private in the Russian army. After gaining a commission, he married Maria Isaeva, the impoverished widow of an official. It was shortly after his marriage that Dostoevsky was officially diagnosed with epilepsy. although he had been sufffering symptoms since his youth. He regained his noble rank, and published two works in 1859: The Village of Stepanchikovo, and Uncle’s Dream. In December 1859, he was finally allowed to return to Petersburg, where he set about rebuilding his reputation in a very different literary atmosphere, dominated by a new generation of radical writers and critics, led by Nikolai Chernyshevsky. With his brother Mikhail, Dostoevsky launched a moderate literary journal, Time, in 1861, and published a number of works, including Notes from the House of the Dead and The Insulted and Injured (both 1861), and travel notes inspired by his first trip to Europe, Winter Notes on Summer Impressions (1863). In 1863, Time was closed down by the censors. It was relaunched in 1864 as Epoch, but soon folded because of financial problems.

1864 was a difficult year for Dostoevsky. His wife died, having been severely ill with tuberculosis for some years, and soon after his brother also died unexpectedly. But this was also when Dostoevsky’s most intense and fertile period of writing began, and the next five years saw the publication of his three most remarkable ‘Petersburg texts’. Part 2 of Notes from Underground (1864) depicts the alienated narrator in the city that has made him: the absurd story of him stalking an officer who has insulted him, and after years of planning, finally getting his meaningless revenge by bumping into him on Nevsky Prospect; the comedy of embarrassment of the dinner with the old school mates he disdains, but whose attention he craves; the torment of his encounters with the prostitute Liza, when he glimpses a chance to transform his life but cannot accept it. But the ‘underground’ philosophy of Part 1 equally belongs to Petersburg: the narrator’s assertion of his own freedom, so obsessive that it succumbs to the very determinism he seeks to defeat, is a paradox born in ‘the most abstract and intentional city in the whole wide world’ and its role as a breeding ground for utopian and socialist theories.

The context of radical philosophy also plays a central role in Crime and Punishment (1866); Raskolnikov, attempting to utter a ‘new word’ and define a new morality for himself, and acting from utilitarian motives which justify a single bad deed through the greater good it will enable, theorizes himself into the murder of an evil old pawnbroker and her gentle sister. The impact of the city is apparent throughout; Petersburg generates the pychological and ideological dynamics that make his crime possible. Delirious in the stifling heat of the summer, his experience of extreme poverty, and witnessing of its correlates – drunkenness and prostitution – in the slums around the Haymarket inspires his compassion, but also causes his mental breakdown. As he daydreams about rebuilding the city on his way to kill the old woman, the role of Petersburg in his quest to become a ‘great man’ is confirmed.

In The Idiot (1868), Dostoevsky moves away from the poverty of the Haymarket to the middle-class quarters of the city – and indeed the summer retreat of Pavlovsk, to the south of Petersburg. But if this superficially suggests greater ‘respectability’, the characters’ fascination with money and sex indicates a degree of corruption that is, if anything, worse than in Crime and Punishment. The naively compassionate outsider, the epileptic Prince Myshkin, tries to turn people to the good, but ends up implicated in the disaster of the novel’s denouement. The hallucinatory chapter in which Myshkin is followed round Petersburg by his rival Rogozhin – or is it vice versa? – is one of Dostoevsky’s most brilliant pieces of writing, as the city feeds the hero’s psychological distress and confusion.

By the time Dostoevsky wrote The Idiot, his life had changed significantly – he had remarried, to Anna Snitkina, the stenographer who helped him write The Gambler in 26 days to fulfill a punitive contract he had undertaken, and together the couple had left for Europe to escape Dostoevsky’s debts. Living in Germany, Italy and Switzerland, with Dostoevsky’s epilepsy worsening, their financial situation had not improved – his gambling saw to that – and their initial joy at the birth of their first child, Sonia, was short-lived, as she died in early infancy. Eventually Dostoevsky did stop gambling, but this nomadic existence continued for some years. The couple returned to Russia in 1871, and Dostoevsky began work on his next major novel, Demons (1871-2), a tale of inter-generational strife and revolutionaries wreaking havoc in a provincial town. Petersburg features in the back-story of Stavrogin, the enigmatic, amoral hero, but Dostoevsky’s shift away from the city may be indicative of his growing nationalism and rejection of Petersburg as the symbol of Europeanized Russia.

By now the Dostoevskys had established a more stable lifestyle. They were living in Petersburg and in Staraia Russa, a small town south of Petersburg that became the inspiration for Skotoprigonevsk, the setting for The Brothers Karamazov (1880). Dostoevsky became editor of The Citizen, and began his most unusual literary project: Diary of a Writer. This cross-genre work consisted of short pieces covering a variety of topics, including comments on current events, nationalistic and, sadly, anti-Semitic rants, responses to readers’ letters, art criticism, and short stories. Several of the latter are Petersburg tales: Bobok, a story of squabbles beyond the grave; Dream of a Ridiculous Man, a re-writing of the story of Paradise and the Fall; and The Meek Girl, in which a man contemplates the suicide of his young wife. Diary of a Writer appeared in 1873, 1876-7, and 1880-1, in between Dostoevsky’s work on his remaining novels. In 1875, he published The Adolescent (also known as A Raw Youth), his final Petersburg novel. The least successful of Dostoevsky’s major works, it centres on the conflict between a father and his illegitimate son, and the latter’s desire to rebel aganst society, as a symbol of the moral decay of Russian society as a whole.

In The Brothers Karamazov, conflict between the father and his sons leads to murder, but Dostoevsky’s final novel is perhaps more famous for the ideological opposition between Ivan’s rejection of God’s world because of the existence of suffering, and the Elder Zosima’s doctrine of universal responsibility and active love. The foreword to the novel state that it is merely a prequel to the main story – which would be about Alyosha Karamazov’s later development and transformation into a revolutionary – but even so it remains the fullest expression of Dostoevsky’s novelistic vision.

Shortly after completing the novel, and by now firmly established as a national figure admired by all sides – including the radical youth he railed against – Dostoevsky died in Petersburg on 28 January 1881 of a pulmonary haemorrhage. His funeral, at the Alexander Nevsky Monastery on 1 February, was attended by over 30,000 people.

The photograph of Dostoevsky is in the public domain, and is reproduced from Wikimedia Commons.